Mount Rotui, commonly referred to as Rotui, is is at an elevation of 899 metres and is located on the north side of the island between Opunohu Bay and Cook's Bay. It is an amazing, but slightly risky, trek. The trail takes you along a razorback ridge line that is just a metre wide in parts. It's steep and strenuous, but you are well-rewarded with scenic views of the island. It may not be the highest peak on the island of Mo'orea, but the hike to the summit of Mount Rotui offers spectacular views of the twin bays that you will never forget.

You walk almost all the way along an exposed ridge so there will be no shade from trees. Wear sun protective clothing and sunscreen, take plenty of water and not that it's best to do this hike in the early morning before the sun becomes too harsh. If it is forecasted to rain or it's very misty, postpone for another day. This is a challenging hike that should not be attempted during the wet season or when raining.

This hike can be started in several places but the most popular starting location is near the Hilton behind private property. The other alternative route is via the Ta'ahiamanu public beach and park. The trail head is located near Moorea Pearl Resort & Spa.

Summiting Rotui will take half a day. Allow roughly six hours there and back. It is recommended to take 3-5 litres of water. There are guides available for this hike.

Views are spectacular throughout the ridgeline section so if you see clouds covering the summit, it's best to stop, enjoy the views and head back down. Most of the trail is overgrown with vegetation, especially at the start of the hiking season (April-May) as this is not a well-groomed, maintained trail. The trail is dirty and often slippery. It's up to you if you want to trust the fixed ropes or not – they are only tied to shrubbery. It's best to wear long hiking pants, good hiking shoes, hat and to bring plenty of food and water! Bring a full change of clothes and treat yourself to a refreshing swim in Ta'ahiamanu Beach after the hike.

The hike's sustained ascent takes you through dense tickets and then along a razorback ridgeline until the very summit. Once you clear the forest, the fun really begins; views down to the overwater bungalows of the Hilton and the clear light blue waters of Ta'ahiamanu Beach are what dreams are made of, and the higher you ascend, the finer the views of the spectacular bays.

Apparently, there has only been one route that has been climbed on the mountain successfully. A Texan party did attempted the southwest face in early 2000s, but they were killed when the pitons pulled out.

The only practical route up the mountain is via the north ridge. The North Ridge Route climbs very steeply to the flame trees and north ridge. In some places, there are fixed ropes to assist ascending the steep sections. If it is dry, the main obstacle is the heat. This is a very hot climb. If it is wet, getting down can be risky.

How to get to the trailhead

Bus schedules always correspond with the ferry schedules on Mo'orea. If you are at Vai'are, take the bus north to the Faimano Village. Locate the driveway where the trailhead starts. There is a sign which says "Art Deko". Walk down this driveway and you will see another sign which says "Rotui" and and an arrow which directs you to the right.
The alternative start from Ta'ahiamanu: Walk towards to mountain northeast of the part. from here, there is a trail that takes you to the rideline. 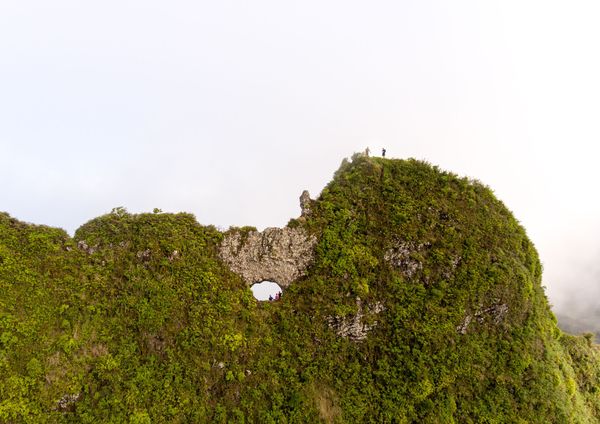 Mount Mou'aputa (830 m) is fourth highest peak on the island of Mo'orea and is something surreal. The peak can recognised from the iconic hole near it's summit. 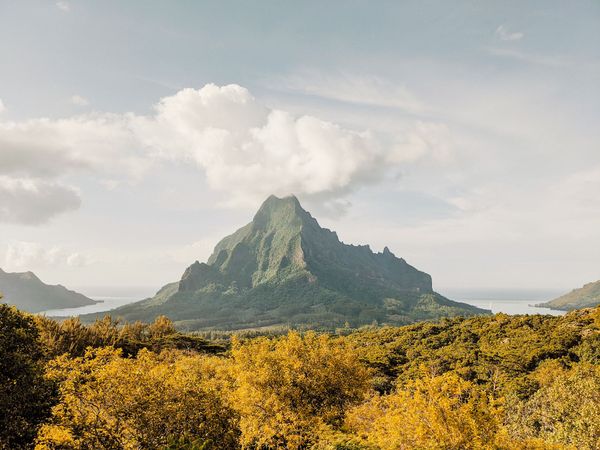 Many of the hikes on Mo'orea start in the lush Opunohu Valley where you are surrounded with unique mahogany trees, giant bamboo, and tropical flowers. In the north, Mount Rotui