An American Bomb Group Squadron based in Charters Towers crashed into Mount Bartle Frere on 21 April 1942 while returning from a search mission in the Coral Sea. They flew into a blind gully which lead to the peak of Mount Bartle Frere. They were searching for the Japanese fleet which was destined to take part in the Battle of the Coral Sea a few weeks later.

Japan's first attack on New Guinea was made on the 21st January 1942, and by mid-February its thrust had taken it as far south as Rabaul. Japan's goal was to take Port Moresby which would then allow it to attack northern Queensland from the air.

In March 1942, a United States air base was constructed at Charters Towers to provide an inland airstrip to fly into New Guinea. Amongst the aircraft at the United States Army Air Force (USAAF) air base were fifteen new B25C Mitchell Bombers. In early April they mounted a raid from Charters Towers into the Philippines via Darwin and, in the same month, were involved in bombing, strafing and reconnaissance work in New Guinea. USAAF B-25C Mitchell Bomber #112455 took part in the early April raids on the Philippines and into New Guinea to support Australian troops in the area. At sunset on the 21st April 1942, the aircraft was returning from New Guinea to Charters Towers when it encountered severe tropical monsoonal weather and rain as it approached Mount Bartle Frere. The aircraft crashed into the mountain and the seven man crew was killed instantly. There are 116 United States's airmen known to have lost their lives in air crashes in 1942 with a radius of 250 kilometres of Babinda.

Route to the wreckage

There was a track cut to the wreckage from the Western Camping area on Mount Bartle Frere around 1990 but the track has not been maintained and only a bit of pink tape here and there remain. The original trail went from western camping area along the ridgeline down to Babinda. The old surveyors flagging tape can still be seen today, albeit hard to follow.

The route starts at the Western Camping area and follows the stream for about a 100 metres until it turns right (eastward) up the spur to the intersecting ridgeline. From here, the trail continues down the ridge taking a right (eastward) turn down another main ridgeline eastward. Past through the fern heath where an old campsite was located on the eastern end. The trail then continues along the ridge and down to the wreckage.

The crash site of a B-25 Mitchell on Mount Bartle Frere is approximately located in an approximate 30 metre radius of -17.3825, 145.83833, which is marked on the interactive map below. The crash site is in the head of a small gully that drains into a small tributary of the south branch of Babinda Creek. The wings, fuselage, and engines are present but in pieces. Numerous bits and pieces have been removed by souvenir hunters over the years.

The trail then continued along the main ridgeline and down to Babinda. Other alternative exit routes could be via Babinda Canyon or directly to Babinda Slides.

All of the tracks marked on the map were well-marked with pink flagging tape from the Western Camping area in 2001. However, the track is currently no longer followable but you can still see bits and pieces of tape here and there.

The rocks can be very slippery when wet. If you have not navigated before in rainforest with GPS and/or map and compass, it is recommend that you go with someone that is experienced. Phone's GPS can be very unreliable in the rainforest, especially in valleys and can get wet or die unexpectedly leaving you in unexpected situation.

Print maps out, laminated them, and take a compass as a backup. Also bring a PLB and secateurs. Moving in the rainforest can be very slow. A lot of the rainforest canopy was destroyed in cyclone Yasi leaving the forest very thick and slow going, expect speeds of 250 meters per hour in affected areas.

We would like this historic site to be remembered, and we would like the relics and artefacts to stay at the site and not fall victim to collectors and trophy hunters. There are few places remaining like this in Australia, let alone the world, to explore that have not been pillaged. There is no reason to remove objects from any of these sites. Please be responsible, respect the history, and respect the importance of this site for future generations. Take photos and leave only footprints. 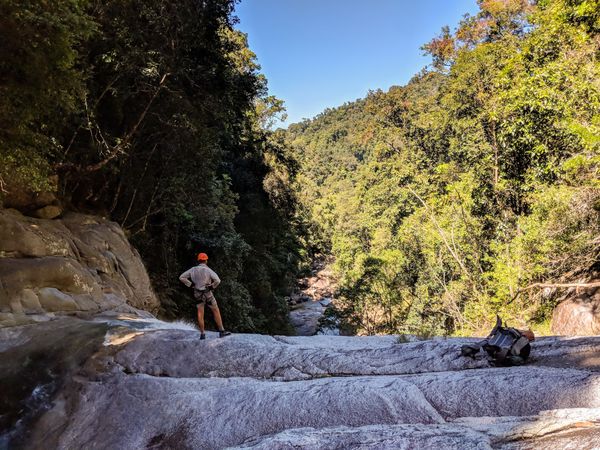 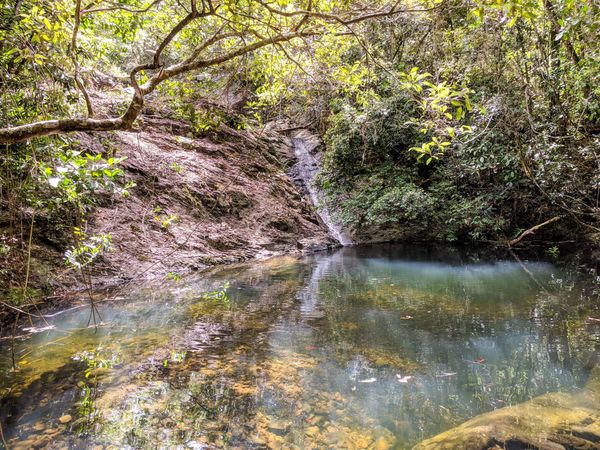 Smith Creek Falls is a small cascade that is hidden deep within the Paluma Range National Park. It is located about 14 km south of Paluma Township. The track follows an old logging road for about 10 km before following a ridge for another 4 km down to Smith Creek.