The old Hervey Range Road, now known as Page Road, is one of the few surviving examples in the region of a roadway dating from early European settlement. This was the initial route from the port of Townsville to the hinterland.

Here's an interactive map of the route:

In the early days, it took up to four days for a bullock team and wagon to travel from Townsville to the foot of the Hervey Range. To do this, they first crossed the Bohle and Alice Rivers, slept at Range Inn, and the ascended the bullock trail through to Thornton's Gap. Today, on the new bitumen highway, the journey from Townsville to Hervey Range takes around 20-30 minutes.

If you take the new bitumen road, have a look at some of the old stone pipes that pass underneath. There are also 1000 KVA power lines that run down the range, and part of the old highway is maintained by Ergon Energy.

Part of the history of this highway stems from the mining industry in Paluma Range in the late 1800s because access to that area was via Thornton's Gap not far from what is now the Herveys Range Heritage Tea Rooms and Piper's Lookout. During this time, Arthur Benham first used a teamster called William James to transport his bagged tin down through Running River, over Hervey Range at The Pinnacles, and then on to Townsville. This road was very steep and required James' team to tie a large log to the back of the wagon to act as a brake. As if that wasn't enough, after this journey, a five-head battery then had to be hauled back up over Hervey Range via the Waverley Tin Mines, which took six weeks.

Since traveling up the range took days, and even weeks, accommodations were important. At the bottom of Hervey Range was the Range Hotel (a.k.a. the Range Inn); at the top was the Eureka Hotel. There may have also been another hotel at the bottom of the range called The Gate Hotel; although, little is known of this one.

The Range Hotel was built between 1865 and 1866 but was closed in 1884; its precise location is now a matter of speculation. Although, a bottle dump, which was thought to have been originally associated with the hotel has been located near old Hervey Range Road (now known as Page Road), and the archaeological site is now heritage-listed. The Eureka Hotel was built at the summit of Thornton's Gap in 1865 and is now known as the Herveys Range Heritage Tea Rooms and a heritage-listed location.

Indeed, as heritage-listed sites and important archaeological locations, we can learn a lot about early road construction techniques and other practices during that period of history from these areas.

This isolated, small cemetery, which lies in the foothills of Hervey Range, just 45 kilometres north west of Townsville. The Range Hotel has the oldest headstone in the entire Townsville region. It is dated back to 1866 and truly a testament to the hardships of early pioneer life. The graveyard where this headstone is located is near the bottom of the range about 150 metres south of the old pub and toll gate. The burial grounds also provided a resting place for travellers and livestock that were using the road between 1864 and the 1970s.

The area is now quite overgrown with lantana, guinea grass, and spear grass.

"The Range Hotel burial ground contains sandstone headstones that are highly characteristic of nineteenth century cemeteries in this region, with relatively ornate decoration typically found on graves dating from before c.1880. There is potential that the recorded burial ground contains additional graves (possibly as many as 21) which also date to the earliest European settlement of the Townsville region.
There are three ornate sandstone headstones of a type often found in North Queensland burials dating before 1880. The lettering on the headstones has weathered and one is lying horizontal on the ground. Each grave is encircled by white-painted stones." – Range Hotel, Burial Ground and Camping Reserve - Queensland Government

There are three remaining headstones with one dating back to 1866 and the other two dating back to the 1870's. There are many reports, unsubstantiated, that as many as 21 graves are located in this cemetery.

The grave of Francis John Earl, a squatter who died of a fever at the age of 25 at the Range Hotel on 12th March 1866, is the oldest extant headstone in the region. The oldest headstone at Townsville's West End Cemetery dates back to 1868; although, unmarked burials occurred there before that date. Francis' death was only the seventh to be registered at Townsville; just two years after Townsville was first settled.

The second oldest is Mary Langton who died at age 28 years old after commiting suicide by taking poison in December 1873; perhaps testament to the harsh life of the pioneers.

The third headstone is that of John Henry Bell, second son of Charles and Mary Ann. John died on 11 May 1875 from inflammation of the lungs. Tragically, he was just four months old.

"A dense concentration of archaeological material is located south of the former Hervey Range Road and the power transmission lines on the high bank of a creek. Some material is eroding into the creek bed. The surface artefacts are visible in a 20m² area, although low visibility due to vegetation cover obscures the full extent of the site. Artefacts include glass bottle fragments and patterned ceramic fragments datable to the 19th century. This may be associated with a potential second hotel situated at the site. An old softwood tree (possibly Terminalia sp.) situated in the middle of this area bears a rectangular-shaped blaze on its trunk, measuring 60 cm x 30 cm." – Range Hotel, Burial Ground and Camping Reserve - Queensland Government

Note: permission/permits may be required to access parts of this area including, but not limited to the Greenvale Railway Line, The Old Highway, The Range Hotel, Mount Luke Mine, and Tabletop Station. 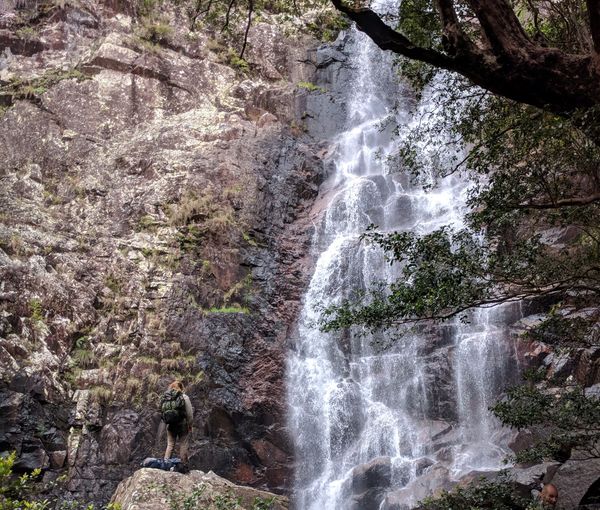 Ollera Creek offers many great waterfalls, with most beautiful being Big Ollera Falls. This area also has many rock slides, gorgeous swimming holes, and Lizard Gorge to enjoy. 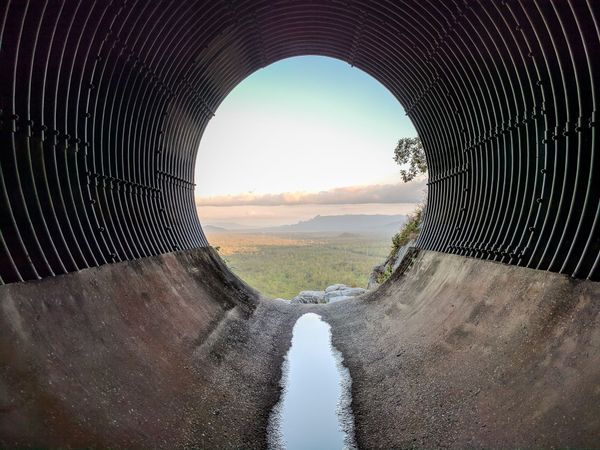 The abandoned Greenvale Railway Line transported nickel from the Greenvale mine to a smelter at Yabulu near Townsville. This area has become increasingly popular with social media of photos of Palm Tree Lookout and the Train Tunnels.