In the Hidden Valley, Queensland vicinity, Puzzle Creek and Deception Creek flow into Running River combining with Star River which contributes sizable proportions of flow in the Burdekin River. Not far away from this area is Paluma Range National Park and the Mount Zero-Taravale Nature Reserve which also has its own very similar gorges and waterfalls.

This area is home to an impressive gorge and Running River Falls. It also happens to be a great place for rock climbing. There are a few bolted climbs between the mouth of Puzzle Creek and Running River. It's a playground for adventurers, with large swimming holes, white water paddling/kayaking, deep water soloing, bouldering, and many cliffs for the rock climbers. It's also very easy to access and not many people know about it, so you are guaranteed to have it all to yourself.

This area is best accessed via the Hidden Valley Station. However, you can also access it via Zig Zag Station and Mount Zero-Taravale properties in the area - permission is required. Zig Zag Station also offers camping and have a few mini-gorges along the river on their property.

The Townsville Bushwalking Club often hike in this area so it's best to contact them for information on their next walk in the vicinity.

Set up a rope swing, space net, highline, waterline, or flying fox/zipline! I've also been told that people have rafted and kayaked down the river in full flow - now that would be scary!

If you're into wildlife, park near the bridge and have a go at platypus spotting - see map below. There also seems to be remains of a campfire here.

Puzzle Creek is a lovely small tributary to Running River and flows in at "The Junction". Consisting of small rocky gorges and cascades as well as sandy beaches perfect for camping.

It is best walked in a downstream direction because the vegetation points downhill and this way you won't skewer yourself as easily. I would also recommend planning this hike with a car shuttle. It is a winter activity as these inland bushland areas can become very hot in summer.

The journey starts well upstream of Puzzle Creek and you will then start walking downstream along rocky banks of the creek, a bit of rock hopping, across some sandy beaches, and you'll also have to climb up beside some waterfalls. The main waterfall is quite spectacular when it is in full flow, but is still an impressive site in its state of suspended animation. Just downstream from here Thunderbolt Creek joins Puzzle Creek, then we have our final push long after a couple of right-angled turns to St Peter's Gate. This spectacular rock formation and waterfall with plunge pool is the jewel in the crown of Puzzle Creek. It is no more than a 20 minute walk from here to the confluence with Running River. Climb over the bread knife-edge and jump across Running River. Take the track up to the Survivor Camp.

There are some fixed hangers (anchors) for an old ropes course/abseil about halfway down the creek apparently installed for an adventure race back in the 1980's or so. You could potentially set up a highline for some cliff to cliff action.

It doesn't feel as remote as it deserves to be because of the power lines that cross overhead and the Duke of Edinburgh's Award and Cathedral School camp out here so you may find a little bit of rubbish (please pick it up) and fire pits.

Thunderbolt Creek runs into Puzzle Creek and has some small gorge-like features. Thunderbolt Creek is home to Communist Cave and another magnificent overhang that contains aboriginal artworks and stone tools – both are on private property and prior permission is needed.

Communist Cave (on private property) was used back in the 1930/1940's to house The Communist Party's illegal printing press. It was used to print communist propaganda that was distributed around Townsville and to the tin miners. The original hammer and sickle and other artefacts have since been thieved. The cave itself is not a cave system as such, but a cavity under a granite outcrop. Very low to the ground, you'll need to crawl in the cavity on the western side of the 'boulder'.

Goanna Mine (on private property) was a tin mine (now abandoned) on a hill between South of Thunderbolt Creek. The old house and several cars and trucks remains are down below near the creek. Wolfram, bismuth and molybdenum were also mined at the Horseshoe Mine and Pink Lilly at Horseshoe Bend, Running River.

This area is also home to Cypress Mine, Millers Number 2 Mine, Whats It Mine, Running River Mine, Red Queen Mine, Yellow Queen Mine, Macarthur Mine, Just Lucky Mine, All Blue Mine, Kookaburra Mine, Mugs Luck Mine, Good Luck Mine / Goodluck Mine, Rose Mine, Ella Prospect, Ella Mine, Surprise Mine, Trump Mine, Joker Mine, Boomerang Mine which are abandoned tin mines, prospects, and deposits with a few being tungsten mines and one a molybdenum mine.

Also in this area is Deception Gorge but it's probably not worth a long hike just to see it.

A good, long circuit could be up Puzzle Creek, then Thunderbolt Creek to Communist Cave, then over to Goanna Mine, then down Deception Creek to Running River and back to the car. Though permission from several properties is required prior to walking.

Here's an interactive map of the area: 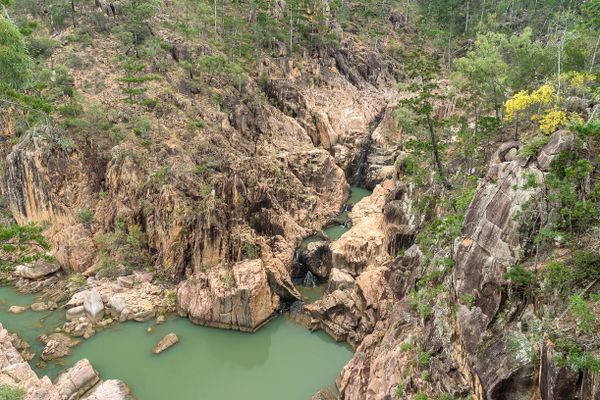 Mt Zero-Taravale Nature Reserve is home to many beautiful gorges and creeks, not to mention it's wildlife. Straddling the Wet Tropics Bioregion and the Einasleigh Uplands Bioregion, its 59,029 hectares is home to many rare and threatened plant and animal species. 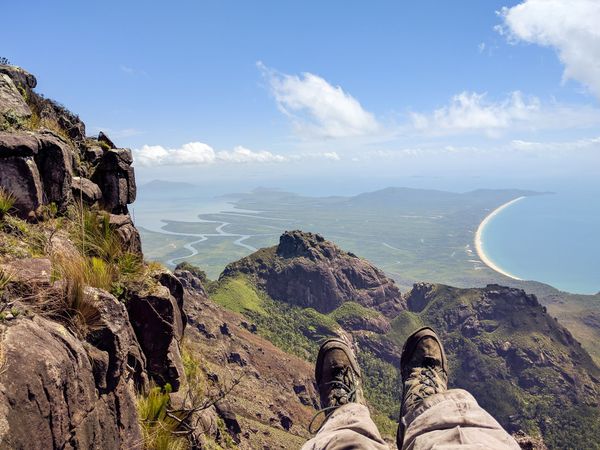 Hinchinbrook Island may be one of the most attractive adventure destinations in North Queensland, largely because it feels like an untouched, lost Jurassic world. Mount Bowen, rising 1,121m above sea level, may be its most popular peak (excluding Nina Peak), and summiting requires quite a hike.