Thornton Peak is a prominent mountain that rises 1,374 metres above sea level and is the highest peak in the Daintree poking out above the Daintree Rainforest. Thornton Peak is located about 80 kilometres northwest of Cairns and it's watersheds provide a portion of catchment to the Daintree River. It is Queensland's fourth highest peak after Mount Bartle Frere at 1,622 metres, Mount Bellenden Ker at 1,593 metres, and Mount Superbus at 1,375 metres. The indigenous Eastern Kuku Yalanji people's name for Thornton Peak is Wundu, and it has spiritual significance for them.

As part of the Wet Tropics World Heritage Area, Thornton Peak is one of those elusive mountains that often hides high among the high cloud's and only on a remarkably clear day does the summit unveil itself to the world. Lush, lowland rainforest fingers its way into meandering mangrove estuaries and idyllic beaches merge with the Coral Sea. It is a place where the wet tropical rainforests meet the fringing coral reefs. This 160 million-year-old rainforest is the oldest in the world!

Thornton Peak rises sharply from the surrounding lowland rainforest, it is a sight to behold. From the summit, views over the western tablelands and Mossman are breathtaking on a clear day. If the weather is fine, the walk is a must for those who love majestic mountain peaks.

The Daintree Rainforests of North Queensland are regarded as one of the most biologically diverse places on earth, hence their World Heritage listing in 1988. The peak is covered by rainforest and is home to a number of endemic species. Thornton Peak is one of only three mountain tops that are home to the cinereus ringtail possum. A group of scientists have suggested the mountain is a viable candidate for the translocation of some species which require a colder climate due to climate change.

Information about access, terrain and water supply is difficult to obtain and finding someone who had actually done the walk is difficult. Picking fine weather to do an extended walk in the tropics also contributed to the delay. The Queensland National Parks and Wildlife Service (QPWS) discourage walkers from doing the walk because of the sensitive nature of vegetation found – primarily near the summit – and because it's a sacred place for the Koko, Yalanii people of the area.

Great care is needed not to disturb the highland rainforest. QPWS also emphasise the remoteness of the peak, while the unpredictable weather conditions can make rescue attempts very difficult. The peak has an average rainfall of about ten metres a year – it is no wonder QPWS would prefer people not to go.

In the wet tropics, the humidity rises suddenly when you enter the rainforest, especially after rain. Walking anywhere between the months of December and April in the Wet Tropics of North Queensland will guarantee that you will get drenched and tracks slippery. There is also the high possibility of cyclones and horrendous downpours of rain. Creeks and rivers can rise rapidly and Thornton Peak wouldn't be a good place to be caught out. However, the months of May to August usually have fine, clear weather with warm days averaging around 25°C and cooler nights. This time of year is your best chance to see the views.

Water is available along most of the walk in the lowland section. A number of creeks are crossed which flow perennially. Before the final ascent to the summit, be sure to fill all water vessels because there is no water on the actual climb. This is a very exhausting section and water stops are needed frequently. At the summit campsite, there is ample water in Hilda Creek, a very large creek near the top of the mountain.

How to get to the trailhead

The walk starts from the Forest Creek Road in Daintree Village, the first road on the left after crossing the Daintier River on the ferry. Do not go down Thornton Peak Road. The walk officially begins at a gate to private property. There is a sign that states "You need permits to continue". The sign also states all vehicles parked will be reported to National Parks for prosecution. Park near the turnoff from Forest Creek Road to Old Forest Creek Road.

The walk starts off gradually, traversing sword grass and lowland paperbark forest for about half an hour. The start can be hard to navigate as there are a series of forks on the private land:

Walk down the right driveway labelled 62 for 400 metres.

After 400 metres you will come to another fork, turn right and follow.

You then pass a property on the left. After the house is about 50 metres there will be another fork, turn right and follow.

110 meters along there is another fork, turn right.

Another short distance and there will be another fork, turn left.

Another short distance and take the next left fork again.

Then a short walk until you arrive at the last fork, turn right.

Head in a NNE direction. Trails from previous hikers may be seen. After about 200 metres, you will start to see tags but they are still a bit scattered. If you hit a cleared property on the right, you have gone too wide east – just correct back to a NNE direction.

Continue to cross a creek and follow the scattered tags until the national park sign is reached. From the sign onwards, navigation is simple as it is well-tagged all the way to the summit.

The trail can be difficult and overgrown as it's privately maintained by people like us. Secateurs are essential for cutting lawyer vine and other growth from the track and keeping it open for others.

The track turns into a marked route following an old logging track up the range to about 300 metres elevation and then follows a plateau through the beautiful forest for about three hours where glimpses of Thornton Peak can be seen in the distance through the heath. It can be difficult if the track is unmaintained and the vegetation thick.

The marked route continues for about another hour until it comes to two creek crossings – a major creek crossing and directly behind is another creek crossing. This creek marks the base of the range and it's all uphill from here to Thornton Peak. Fill up water before continuing as the ascent up the ridgeline can take up to five hours and is extremely tiring, especially in warm conditions.

It's a tough climb to the southwest end of the boulder field. Camp at Summit Camp beside Hilda Creek. There is always water available in this creek (at about 1200m), so you can spend time near the top without having to carry water up.

When you get to the first open boulder field, follow the Cairns north and find tags again that head downwards into the summit valley. Arriving at the top of the western ridge is satisfying with grand views over the western and southern horizon. Thornton Peak is clearly visible to the east.

Directly below the western escarpment is the summit campsite beside Hilda Creek and is only 15 minutes walking from here. From Summit Campsite, the summit of Thornton Peak is an additional 45 minute walk up the eastern ridgeline.

A somewhat risky rock scramble is needed to reach the true summit and can be very dangerous in wet and windy conditions. Most hikers prefer to take a rope. There is a metal rod at the top of the scramble where the true summit is located.

Here's an interactive map of the area, including points of interest. 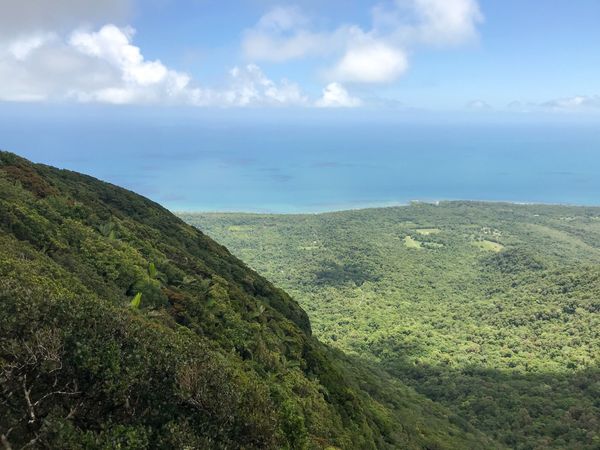 Mount Sorrow is located in Daintree National Park near Cape Tribulation. This steep ridge trail offers spectacular views from an elevation of 680 metres including the Daintree coastline, Snapper Island and shadows of the individual reefs that make up the Great Barrier Reef. 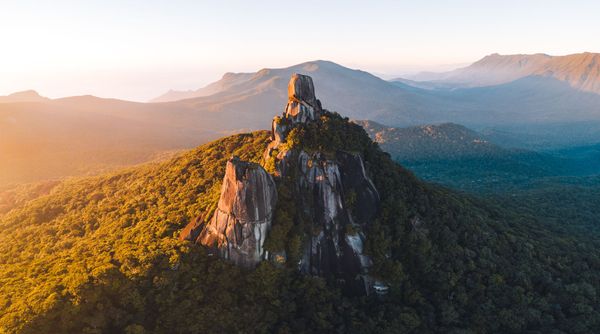 Mount Pieter Botte (Ngalba-bulal Alpaboolal) is a mountain 1,047 m in elevation in Daintree Rainforest. Located in the tableland region behind Cape Tribulation in Far North Queensland, Australia and part of the Wet Tropics of Queensland World-Heritage Site.