Located in the region of Townsville, near Black River and out near Hervey Range at the southern end of the Paluma Range, Mount Black is at an elevation of 410 metres with its counterpart, Notch Peak (146 m), right next to it at its base. Mount Black is located in close proximity to Mount Cataract (721 m) and Mount Kataughal (389 m). The terrain around Mount Black is hilly with mainly green-green deciduous forest growing, the same as Mount Cataract.

The geology of Mount Black is interesting with rocks consisting of dacite to rhyolite porphyries with similar acid volcanics to Frederick Peak. The rare flow banding trends at 140 to 170 degrees, dips nearly vertically, and consisting of lava flows and pyroclastics, including welded tuffs. The volcanics are intruded by fine-grained basic dykes, and by microgranite dykes (loose blocks only).

One of the potential routes to the summit is via the ridgeline which offer easy walking and great views of the surrounding countryside (Mount Margaret, Frederick Peak, and South Pinnacle) as your gain elevation.

Note that access is via private property which borders the high voltage powerline service road.

Both Mount Black and Notch Peak are accessed from Mill Road via Bruce Highway, Yabulu. Mill Road services the properties in the area and a quarry on Mount Black. The powerline service road runs parallel to the mountain and the closest point is about 100 metres short of the base of the mountain. Notch Peak is best accessed via following the service road left (north) and can drive almost to the summit.

Please ensure you don't cross any private property or trespass. Understandable property owners won't tolerate damage or intruders. Please look after our primary producers and insure that you do not cause damage to properties or trespass. Don't ruin it for other adventurers!

The summit is covered with trees but you are able find several lookouts to take in the views, however the ridgeline offers an easy but exposed way to the summit with beautiful views of the surrounds.

There are patches of lantana and vines that you may have to bash your way through closer to the summit.

There are a few hazardous creatures you may encounter on this adventure. These include Rainforest Scorpion, Yellow Paper Wasp, Death Adder, and Queensland Tarantula. I'm sure there are a few Gimpe Gimpies the dense parts of the hike also. Hillary Creek is quite a beauiful creek when it's flowing. Mt Houston is similar to Mt Leach and doesn't have a view to offer. The summit's vegetation turns into bushland instead of rainforest. 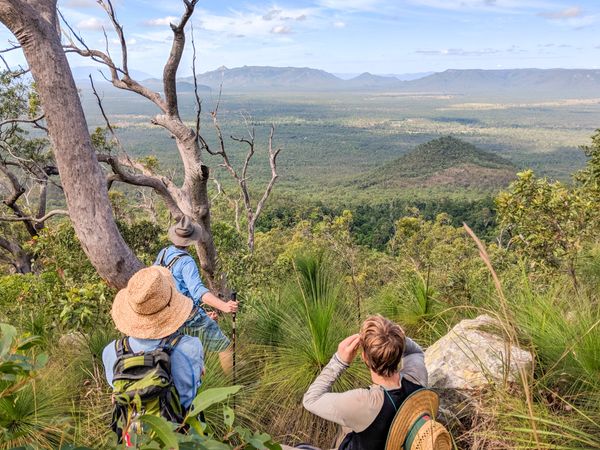 The eastern ridgeline offers an easy assent and provides views of the surrounding countryside as you gain in elevation. The summit of Mount Cataract is at an elevation of 721 m but doesn't not offer any views.