Last Saturday we went up to Paluma. We explored Little Crystal Creek for a little bit, went to the Paluma Village and then, equipped with our sleeping bags, went for the surprise hike that Luen had planned.

Paluma is about a 1.5 hour drive from Townsville. From Townsville you have to follow the Bruce Highway (A1) until you get to the sign where it tells you to turn off to Paluma. From there on it is another 40 minute drive up the windy road to the town. There are several waterfalls and waterholes you can explore, like Big and Little Crystal Creek.

Our Weekend in Paluma

We got up early to catch the sun rising above the forest at Paluma. Waking up I thought what a stupid idea and that I would have preferred sleeping much more, until I saw the sun coming up over the hills. Sunrises are something we don't witness very often but when I do, I always wonder why I don't do it more often.

Still a bit tired, we then drove to Little Crystal Creek and climbed up the rocks to get to some more of the waterfalls. The waterfalls are stunning and the water so cold that I gasped for breath when I went in, but it makes for a good refreshment on hot days. Crystal Creek has a very peaceful atmosphere early in the morning. There were no other people around yet and we had the place all to ourselves.

Eventually we got hungry and drove up into the Town of Paluma. Which only really consists of a handful of houses, a few guesthouses and inns. We went to the McClelland's lookout where they have picnic benches and a barbecue to sit down. However, we were so hungry we just ate at our car.

Next we went to Witt's Lookout and Cloudy Creek. It's only a short walk and the view is spectacular. We then went back via a new path to the town and walked back along the street to our car.

My inner coffee clock was by then telling me that it was time for a coffee. Unfortunately the place that we usually go to (Rainforest Inn) was closed today, so we went to the Ivy Inn instead.

They have a nice veranda where we enjoyed coffee and cake looking into the garden. I guess this is only a good place if you like birds though. At least ten birds were wanting our cake as much as we did. Some bold ones even jumped onto the table. Luen read the book I brought and we relaxed for a little while.

About a 20 minute car drive from the Paluma Township is the Paluma Dam which has a super nice campsite. We parked our car at the dam and packed our bags for the hike. I had no idea where we were going, I only knew that it should take about one hour to get there (estimated by Luen) and that we would stay the night.

So off we went into the rainforest. The sky looked blue and the sun was shining. At least for 10 minutes. Once we got a bit deeper into the forest, we started hearing a noise that sounded like thunder. However, the sky looked blue so we assumed it might be something else and kept walking.

After a while it got a little darker in the forest and the noise that sounded like thunder, oh wonder, turned out to be thunder. Luckily we already had been walking (very fast) for 40 minutes by then so I thought it can't be much longer. Well, I hadn't calculated, and neither had Luen, that his estimated hour would actually be two hours. So we kept hiking through a darker getting rain forest at a speed somewhere between walking and running followed by the sound of thunder. So much for a relaxing weekend. At that time I was not particularly happy.

But after two hours we got to the place which turned out to be a lovely shelter, DCK Shelter (private property), in the middle of the heart of the rainforest. That made me happy, as I already imagined us just sleeping under a tarp in the middle of the forest. Surrounded by giant trees and listening to the sound of the nearby creek, I relaxed in the hammock and read my book. Later on we chopped some firewood and ate dinner (freeze-dried food - yum!) sitting by the fire with a bottle of red wine.

Be sure to stay up at night and watch the fireflies and bioluminescent fungi lighting up the rainforest!

The next day we did the same hike back and I went back home, while Luen went for another 6 hour hike with the Townsville Bushwalking Club. Don't ask me where he gets that energy from.

The DCK Shelter and Hiking in Paluma

The DKC Shelter is private property belongs to Wilfred and Suzanne. Contact them if you would like to stay here. Also read about the walking trails up at Paluma. 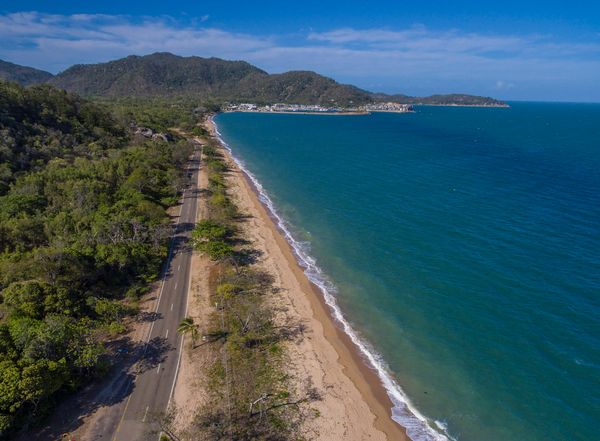 Finally! Ever since I've seen the pink topless cars overtaking me effortlessly while I struggled riding my bike up the hill on Magnetic Island, I wanted to once be the 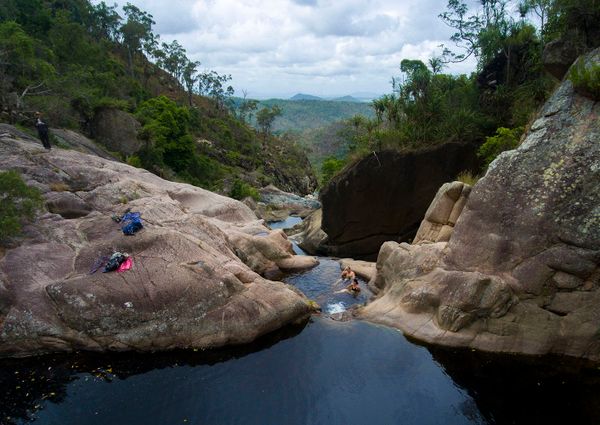 This trail takes you down the range from Paluma Dam to Jourama Falls. Take a break on the top of Jourama Falls to swim and enjoy the views.