Mount Diamantina, or Gunandali by the Bandyin (Bandyinbara) aboriginal tribe name, rises 955 metres above sea level and is located within the Hinchinbrook Island National Park in Far North Queensland. Along with Mount Bowen, the highest peak on the island, The Thumb, known for its iconic towering peak and ruggedness, and Mount Straloch, renowned for the B24 Liberator wreckage, the four make up the main, and most spectacular, peaks on the island. While Mount Diamantina may be considered the easiest of the four to summit, it is desirable by many due to its unique boulders on top and it's panoramic views.

A special mountain permit is required to hike off-track (i.e., any of the major peaks) on Hinchinbrook Island. It is also best to check with Queensland National Parks before planning your trip, especially to ask about scheduled burn-offs and other programs in the area so you can schedule your adventure accordingly. It's not just for human safety (i.e., because numbers are controlled/monitored), but largely to protect the fragile, heath vegetation that covers most of the area. It is important to note that those just doing a day trip also need a mountain permit. Any group wishing to hike in the mountains will need to apply – in writing – to Queensland Parks and Wildlife Service (QPWS) at least a few weeks in advance. This is all the more reason to remember to be low impact and embrace the "Leave No Trace" and "Pack it In, Pack it Out" philosophies.

Summiting Mount Diamantina depends on the route you take and weather conditions, which can change quite suddenly. The best time of the year to do this hike is after the wet season (i.e., June - September) because it's not too hot, but there's still enough water in the creeks.

Sustained activities in hot and humid weather can be hard and should not be underestimated. Hiking on Hinchinbrook Island is no exception. This island seemingly has its own weather system as well, which can be unpredictable at times. Plan and train for any off-track hike on Hinchinbrook Island like you would a trip to remote Southwest Tasmania or New Zealand.

Although not as high as Mount Bowen, the climbing may well be as arduous due to fewer ascents and hence less distinct tracks through the thick vegetation. Several routes have been taken to get to the summit. The most popular route is via Diamantina Creek, which includes an approximately five hour rock hop and two hours at the top where the route opens up into grasslands. Below, I describe this route as well as three other potential routes you may consider. A lot of these routes can be done in a day but a very high level of fitness and capabilities is required and would take approximately 10 - 14 hours. Do not attempt creek routes in wet weather as the rocks can become extremely slippery and dangerous. Good rock-hopping experience is required. You are very remote and even a small slip could result in a helicopter ride out.

From the south end of Zoe Bay, follow the track along the north bank of Waterfall Creek, past Zoe Falls, and into the upper reaches of the creek. Rock-hop upstream as far as possible to avoid the dense vegetation before finally gaining the higher open ridges of Mount Diamantina. Climb the north-east ridge to the summit and Diamantina Rock.

This route, in my opinion, is one of the better approaches. From Zoe Bay, head up one of the creeks until it starts to get too scrubby. Then, start heading toward the ridgeline. Follow the ridges through fern-filled saddles and along the open grasslands. The rainforest saddle is a good place to camp if need be. Then, continue along the saddle to the summit.

Access via Diamantina Creek is the most popular route but should not be attempted during or after rain. From Mulligan Falls, follow the Thorsborne Trail to where it cross Diamantina Creek at which point, follow the creek upstream for two hours to a major fork – keep left. You will reach a waterfall after another hour. Climb to the left around the large rock face in the centre of the creek. Another two hours upstream, the creek narrows and becomes too steep and too difficult to follow. At this point, leave the creek, and head left pushing through the thick shrubby, low-level vegetation. That will be your only option at this point anyway, as heading right would take you to a sheer rock face. Continue up the ridge between Mt Straloch and Mt Diamantina. Keep heading upwards to the summit. It's approximately two hours from exiting the creek to summit.

Along the Diamantina Creek Route, you will encounter vegetation that largely consists of short shrubby bushes and grasses. You may also see some pink flagging tape tied high on some yuccas trees along the way, which should accurately mark the route, but don't rely on it solely. A five metre rope can come be helpful for lowering and raising packs at the waterfall.

Follow Moth Creek the entire way until you get to a major fork. At this point, exit the creek, and keep heading upwards to the summit.

From the inland side of Hinchinbrook Island, drive your boat up the Deluge Inlet as far as possible and set your anchor. Head up the creek until it becomes too difficult to proceed. Then, move toward the ridge and proceed to the summit.

When you reach the summit

At the summit of Mount Diamantina is Diamantina Rock. Although it is called one rock, it actually consists of two large boulders – the North and South Rocks. They look like they used to be one large boulder that was split in half, creating a large gap between them. In between these two boulders are three canisters containing log books.

There are several rumours about people climbing the boulders. Although tempting, don't expect to free climb either of these without protection (e.g., ropes). Most people jug (jumar or prusik) up a rope that they have thrown over one of the boulders. In theory, an extremely tall and skilled person could climb the "chimney" between the two boulders, but there are no features in the rocks for placing protection, thus making it extremely dangerous. Rumour has it that the North Rock, the smaller of the two boulders, was free-climbed by a group boys from Ingham in the late 1970s using a nearby tree. Even if this rumour was true, that tree does not exist anymore and there aren't any significant trees on this mountain top, only small shrubs. The climb up the North Rock has since been attempted at least one other time, but due to a general lack of fall protection, the climbers allegedly bailed. The first documented free ascent of the North Rock was by Madoc Sheehan and Luen Warneke in 2018. Alan Simet is rumoured to be the first to ascend the South Rock. He did so by throwing a rope over the top and jugging to the summit.

Free ascending the North Rock of Mount Diamantina (North Face; 15m, grade 16)
Start at the middle of the North Face at the thin, vertical seam. Place a #3 or 4 nut in the seam while proceeding up the face. This is considered the crux of the route. The next section will ramp upward. Proceed, and then traverse 3m to the right while placing a large wire (#8) and one or two cams (e.g., red/green Camalot). Continue upwards through the weaknesses in the rocks, an area that consists of a lot of scoops. Once you reach the top, thread a sling through a hole in the rock, and in conjunction with a large cam (e.g., blue Camalot), belay your second climber from the top. The first person can then rappel down off of the anchor and set up a new anchor at the ground (i.e., sling a boulder). The second person can retrieve the gear at the top and rappel down from the other side of the boulder using the sling anchor the other person has secured at the ground. View Diamantina Rock on theCrag

There is also a waterfall to visit just down south from the summit.

What you bring will depend on duration, routes taken, and activities. Essentials are:

Safety is paramount in these rugged, remote wilderness areas. It's important that people who are considering hiking up Mt Diamantina are aware of the risks. Here are some things to consider:

Here's an interactive map of the Mount Diamantina with the routes and POIs. 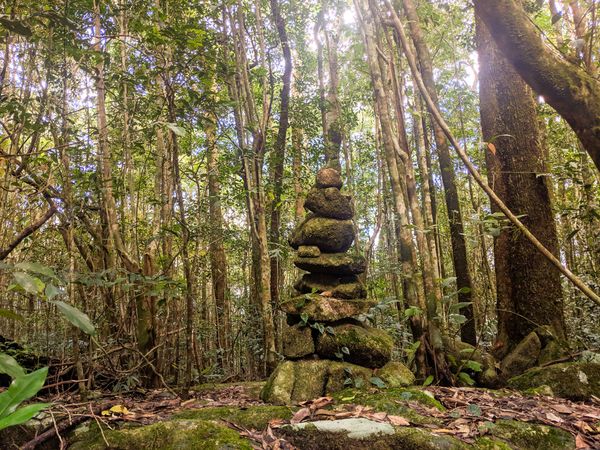 Mount Spec (995 m) is the highest peak in the immediate area of Paluma Village and the second highest in Paluma Range National Park. Because so much mining and logging activities centred around the Mt Spec area in the late 1800s, there exists a rich history. 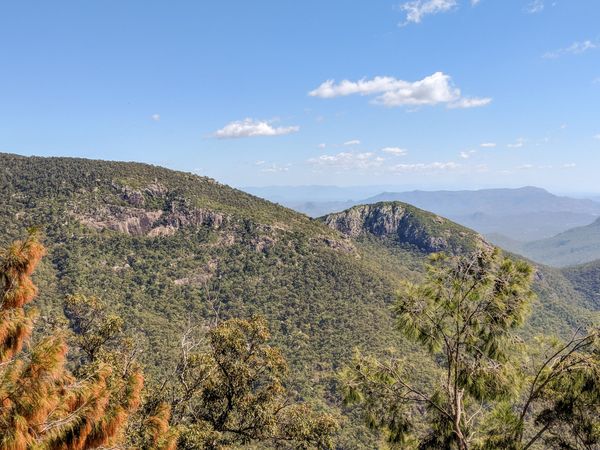 Joy's Cliff is be seen from many vantage points in the national park. Atop of the steep cliffs are sweeping views across the landscape, similar views to Cockatoo Rock. This is a long circuit walk, but a great one.