When I told friends that I was going to visit Palm Island (part of The Palm Island Group), heads would turn and people would try to talk me out of going. Sure, it's not considered a tourist destination, only contractors go there and it's had a rough history which most people know about. However, much to my relief, Palm Island is full of friendly people with smiles on their faces and most of them waving and saying "hello" as you walk by.

Great Palm Island is also known as Palm Island or, by the Aboriginal name, Bwgcolman. It's a tropical island with an area of 55 km2 (reference Wikipedia) and has a community of about 3,000 people. Palm Island is one of Australia's most visually stunning locations. It is the main island of the Greater Palm group and consists of small bays, sandy beaches and forested mountains rising to a peak of 547 metres. The ocean surrounding the island is part of the Great Barrier Reef Marine Park where extraction and fishing are regulated.

There are several methods to get to the island: fly, ferry or take your own boat. The SeaLink ferry departs from Townsville and lands on the jetty in Coolgood Bay where the main village is located. The best time of year to go is after the wet season when all the creeks have been flushed out and temperature isn't too hot. One of the main things you'll notice when you're there is that there's a lot of wild horses and dogs roaming around on Palm Island.

There's plenty of things to do if you don't mind a bit of a walk. Visit the small bays, take a stroll along the sandy beaches, roam around the streets, summit its mountains, swim in a creek, and snorkel in the pristine Great Barrier Reef marine park.

A nice route to walk would be going out past Casement Bay (and its lookout), past the airport to Butler Bay and around to Pencil Bay.

Swim in the freshwater waterfall at the end of Palm Valley Road (see the interactive map below) or snorkel and explore the corals and marine life around the island.

Walk out past Casement Bay to Butler Bay and onto Pencil Bay. On the way towards the airport you will pass Casement Lookout also known as Sylvia Reuben Lookout. It overlooks Casement Bay and provides a great resting area for morning tea.

Follow the road for about two to three hours from the jetty to the summit of Mt Bentley and be rewarded with views of the entire island. Camp near the summit and watch the sun set over Curacoa Island, Fantome Island, Orpheus Island, Pelorus Island, and Hinchinbrook Island; The jagged peak of The Thumb (next to Mount Bowen, the highest point) really stands out on the Hinchinbrook Range. If you look closely you can see the rock atop of Mount Diamantina. On you way up the road, you'll pass three dams - the Solomon Dam, Minggudjamba Banbarribarra Dam (also known as the New Dam), and top dam (name unknown).

If you are super keen, you can attempt to go to Onion Bay and Mundy Bay via the coast at low tide or walkabout (bushwalk) up over the summit of Mount Lindsay and follow the creek down. Camp on the beach and the next day you could try climbing up the creek to Mount Bentley and back down the road (1.5 hours from the summit to the jetty via the road).

Here's a map of Great Palm with points of interests and possible routes shown.

This rock hop, boulder scramble and bush bash is a good beginners walk and might earn you a sense of accomplishment. The mountain creek scenery, views and swimming pool at the top falls makes for a nice hike. 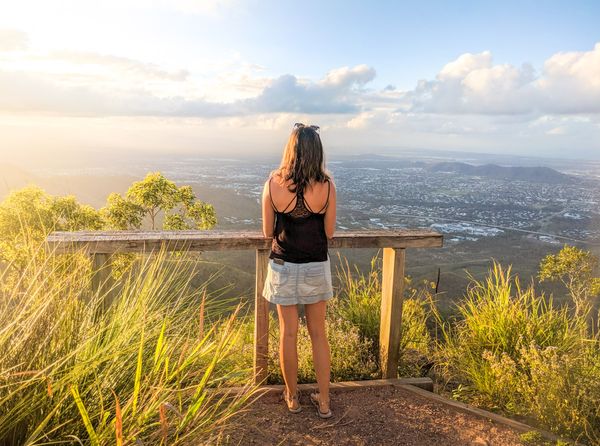