Patterson Gorge, also known as Patterson's Gorge or Black River Gorge (and sometimes misspelled as Peterson Gorge or Peterson's Gorge), is part of the headwaters of Black River. The upper reaches are filled with boulder-lined streams with steep valley sides. The catchment area trickles water down the range passing under the Greenvale Line bridge and reaching the bottom of Hervey Range where the river turns into a sandy bottom. The gorge is marked and named on the Ben Lomond 8159-2 topographical map.

There are several routes that be can be taken to arrive at Patterson Gorge; for example, hiking in from Keelbottom Creek, Thornton's Gap, Yabullu (Mill Road), or from Bluewater Creek. The Twin Gorges Walk links up Bluewater Gorge and Patterson Gorge and was proposed for the dry tropics great walk. Potentially, walking around and traversing the scenic rim atop of Patterson Gorge would allow you to admire the magnificent views down into Patterson Gorge and across to Mount Cataract ridge. However, water sources may be an issue depending on route.

From the bridge, ascend alongside Black River towards Patterson Gorge where you will navigate through slopes poplar gum woodland slopes, coastal riverine woodland e before arriving at the semi-evergreen rainforest c in the upper reaches. Climb out up the end of the gorge to an 800 metre peak on the northern rim.

Link up with Bog Hollow, with it's unusual top of the range reasonable water availability or Junction Waterhole (also known as Junction Lagoon which where Keelbottom East and Keelbottom West meet), a popular campsite with a taste of inland Melaleuca lined waterways with adjacent plains that expand outwards.

If starting from the top of the range at Thornton Gap and walking down the railway through two tunnels, this entrance route involves much less climbing. Other possible entries are via Palm Tree Creek at the end of the tunnel and climb steeply up the scenic creek. Alternatively, one of the ridgelines after the tunnels. Every route involves a bit of a scrambling, negotiating boulders and cliffs, but all are pretty in their own way.

Alternatively, start at the bottom of the range and visit the large grave headstones of important business family which are also the oldest marked-graves in Townsville.

If done as an overnighter trip, consider camping in the uppermost alluvial area approximately one kilometre past the railway bridge. The creek has reliable water available for approximately six months of the year. It's a great place to camp and access almost permanent flowing water. There are a few pools along the creek.

Note that some of these route plans involve private property and prior permission is needed.

Note that, if accessing via the Greenvale Line, the Greenvale Rail tracks and lines have been removed from the corridor and the huge modern concrete railway bridge over the upper Black River (the entrance to the main valley). The bridge is a great viewpoint almost surrounded by mountains and steep slopes.

The Queensland Department of Transport and Main Roads manages closed rail corridors across the state. The Greenvale Railway Line is state-owned land, and the closed rail corridor is not open for public use. Additionally, it is not safe to traverse the line due to unstable terrain, one partially collapsed tunnel, and the bridge is not safe for walking.

Please note that there is significant Aboriginal art and history in this area as this was an important indigenous route. So please mindful and respect Australia's cultural background. Follow the 'Leave No Trace' principles, and deseed your boots and clothing before hiking in the area.

The leaf-tailed gecko (Phyllurus gulbaru) are endemic to this gorge.

They are currently known only from the Paluma Range in the southern edge of the Wet Tropics north-west of Townsville, Queensland. It is restricted to two sub-populations, separated by unsuitable habitat, which cover a total area of 21 km² with an actual range of approximately 14 km². The boulders in this dry rainforest habitat are large and stacked to form complex chambers and crevices. These boulders retain moisture better than the surrounding habitat, supporting an array of flora and fauna absent from the grassland and dry woodland across much of Hervey Range.

The river oak form of coastal riverine woodland within a kilometre either side of the bridge is considered endangered.

Landscapes of poplar gum woodland 80% mosaic with seasonally very dry rainforest are common is this area with slopes full of semi-evergreen rainforest c and tall bluegum forest which begin to occur near the Greenvale bridge, the lower end of the Wet Tropics. 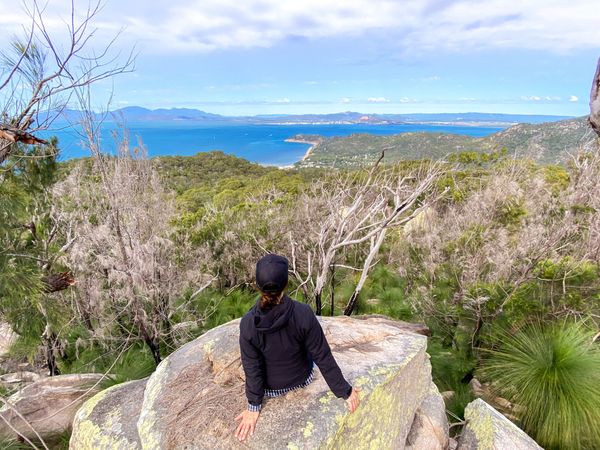 Mount Paluma rises to an elevation of 322 metres on Magnetic Island. It's only rival there is Mount Cook (493 metres), and together, these two peaks are the only official mountains on the entire island. Many did not even know this peak – Mount Paluma – existed! 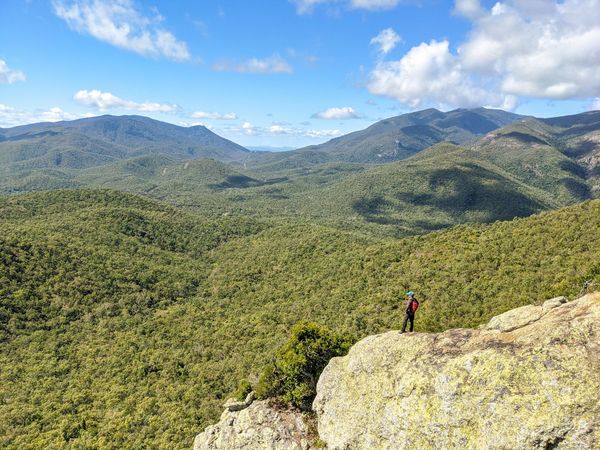 The Sisters Mountains are located in northeast Australia, just south of Townsville and Elliot Springs and actually consist of three peaks, the West (425 m), Middle (429 m), and East (422 m) Sisters. The three sisters and the main ridgeline provide some of the best views across Townsville.